The Value of the Figure (or of the Image)

At a first sight, the ideas of contemporary art and figurative style may appear antithetic, aiming at designing separate, non-communicating worlds. These days, we’re accustomed to consider the figurative style an out-of-date, concluded experience. The exemplary research of Paolo Petrucci, though, denies all of the above. In fact, this research faces difficult subjects: the sense of image perceived with eyes but seen with the mind, the subject of vision authenticity on one side and the meaning of the pictorial work as an act of critical knowledge of the truth on the other.
Generally, we’re used to consider as contemporary the idea of immediacy (ofter through an abstraction) – of contemporaneity between the author’s thought becoming real through the materializing of his work and the reading or enjoyment we derive from admiring it. On the contrary, we only ascribe the authenticity of an image to the sensible world which a photograph or movie image offers to us.
What is a piece of material re-read and spread through an optical-mechanical medium is the intangible coffer of the message brought to us from reality, and completely different from the artist’s imaginative creation.
The above is not completely right. If man had no sight, the world would be invisible and inexpressive to him. However, more than one can believe, being able to see is to think, to abstract, to select, to underline. A question remains. Our minds are accustomed to consider motion pictures as fully expressive art works. Yet – still today – our minds consider the concept of authenticity in a collective art age as something impossible.

As we all know, art and photography follow completely different routes when they try to represent the truth. This is indeed the work of an individual. This is the matter of Paolo Petrucci (who, by the way, is a filmmaker, too), a man and an artist proudly against the tide, a figurative artist in an age of abstraction at all costs.The figure is intended as a harmony in the conception of the work, as if it was simultaneous with the divine act of subject creation. Actually, Paolo Petrucci’s art is not a poetic independent work. On the contrary, it is intended to be some kind of refraction prism, a kaleidoscope of meanings and signs that reflect the image of the created nature, of the sensible, of the human pathos.
The thought and the brush, but more often the spatula, render to the outside, hence to the contemporary, the subtle thread of a continuous relation between place, event and memory. The artist’s will becomes an interpreter of the time elapsed to delete it in a contemporaneity of images, different in shape but homologous in their substance. An attentive study of the subject coincides with the project and its realization, with the study of the idea-figure progress, with the reintegration of executive sequence in parallel, stage to stage, so as to jealously create and take care of the idea and the message, to transform the becoming, the instant into the being.
Areas of thick, almost edible colour which is spread on masonite or on canvas give to the figure or to the landscape the material consistence to which Paolo Petrucci entrusts the realization of his vision. The effect of sumptuous and tactile colour planes, often reflecting and glowing, more rarely opaque, but always with any technique and on any support, rich in substance, constitutes a characteristic and at the same time the author’s unmistakable signature. Paolo Petrucci goes over again the platonic example of the cavemen, those first painters who assigned a propitiatory and predictory value to the represented figures, ascribing the positive realization of an event to the magic of representation.
The means is the colour, which is all. Each pattern of the composite and variegated inspiration – always authentic, even in quoting – is a cry which subdues restrained by modesty, but the light shade which is the image substance remains. It is a long, constant, hard research contucted with a “furious” firmness for over thirty years without never going astray during which many of the “sacred archetypes” of the Italian painting remain in the inspiration. The artist creates, but the vocabulary is repertory and the man’s culture imbues the painter.

And now the landscapes, the space of life. In detailed, almost abstract shapes, colour tesseras which reveal buildings, countries, ruins silhouetted against a red-hot or at dawn misty moisty sky. From a “red” Navona Square to the Bisentine isle of the Bolsena lake, to Sicilian gulfs. From the “purplish homesickness” of the North Sea to the shining sun in Spain, up to the Storms and Fires (the oil-wells given to the flames during the Gulf War) are occasions to mix “fragrant” emotions with different remembrances on Paolo Petrucci’s palette.
From Scipione (Gino Bonichi) to the Böecklin of the “Island of Deads” but de Chirico’s first works and Balla are not extraneous. Clean colour planes to build the light and with it the space, with the learned consciousness that the landscape painting was born in Italy and it first divulged the ideology of landscape. As a follower of landscape painting tradition, not excluding ruins, pines and cypresses, Paolo Petrucci sees Selinunte golden and Rome red in the sunset. This is not enough: Rome also embraces the “Cupolone” plunged in an ashen sky. The domes seen from “Pincio” during spring, the glowing or leaden bridges on the Tiber resound with all Rome colours, all the sky colours, also the night colour thick with moons and stars. One can catch the “beatiful” of the nature that makes serene the emotions of him who makes painting and enjoys it. Paolo Petrucci aims at the universal, but he knows that each “particular” is interior to the universal and in turn is itself universal. That is why some “places” or some recurrent themes, almost a kind of categories, of lenses to look at the universe are recognizable in his style. 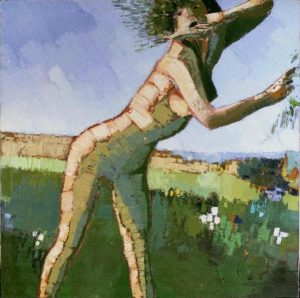 The myths. Leda and the Swan, Apollo and Daphne are subject resumed many times also at many years’ distance. They represent the unavoidable ancestral “desire” which transform in nature the human being. It is miracle, mystery, and in conclusion life. The human material is rendered whith absolute colour planes (a remembrance of “Cross legend” by Piero?), the becoming stopped at the moment is described in the colour kaleidoscopic mosaic. The episode of “Diana and Atteone”, the guilty desire punished, or “Ruggero who sets Angelica free” are the connection between myth and pathos. 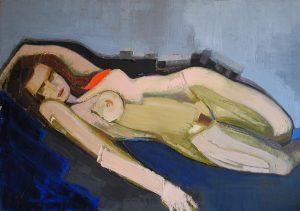 The nudes. In Paolo Petrucci’s nudes, the close-up female figure and legs are the tentacles of a coercive wish that cannot be given up as wanted by nature’s relentless strength and it is rendered in painting with the irresistible strength of the light. The temptations, the embraces are caught as pure satyrically obvious acts, the dark colour of the male wish contrasts with the woman glowing light. The contrast of colour, in the tangles of the forms, build the pathos dynamic.
To embrace with steady vigour the difficult essential themes of the human existence through the instrument of an image, so much expressive and synthetic as imagined on the instant but so difficult to materialize is Paolo Petrucci’s continuous, firm, hard labour.
The “word” perceived by eyes but seen with the thought, the theme of the vision authenticity on one side, and on another side the meaning of the painted work as an act of truth critical knowledge are the fragrant characteristics of an artist who is reluctant and reserved and modest in showing off but bound to the highest attention of those who are able to see.