In March 1965, after visiting my first personal exhibition, Carlo Laurenzi, a journalist known in Italy for his elzevirs, wrote:

“This young man’s enthusiasm is mild, almost sad. Painting seems unavoidable to him, it’s something that devours him, to which it would be reasonable to oppose, if only the attempt wasn’t so vain”.

I always thought this was an apt observation, and my whole life as a painter has always been motivated by that feeling of inevitability. During the most unimaginable moments, often upsetting my girlfriends, the fever took possession of me, and after squeezing the tubes, I grabbed the putty knives and started squashing the paint on the canvas or the masonite.
Judging and writing about one’s own painting is difficult. To explain the feelings and the secret motivations that bring an “artist” to express himself is an almost impossible task. I also think that a pictorial work should strike the sensitivity of the beholder, without the help of any additional explanation, which would turn art into a literary exercise.

An art-loving friend of mine says that the artist, in the moment when he paints, doesn’t know what he’s doing, or the reasons that are leading him to “create”. He’s like someone who (ignorant of his own anatomy, bone structure, muscles and nerves) moves from one room to another. This person only knows that he covered a distance, but he’s completely in the dark regarding the impulses which, starting from his brain, made his legs move. I can’t say he was wrong. I often don’t know the reason why I painted a picture, I only know that I did it and that the finished work is alive, or , if it was born dead, that I can’t do anything but destroy it. I don’t know the reasons that brought me and still bring me to paint. I only know that anxiety often takes hold of me and push me to do it. That inevitability is like thirst, or hunger.

They tell me that I started to smear pillow cases and sheets with crayons since the age of 3. To those who asked my name, I used to answer “Paolo Petrucci, painter”. My young age made my conceit forgivable.
As a boy, I loved the works of the Roman School – especially Scipione and Mafai. Of the latter, with my immense pleasure, I later became a student at the Art Academy in Rome. In those days, my painting was already thick, engraved, spread with the aid of a spatula. 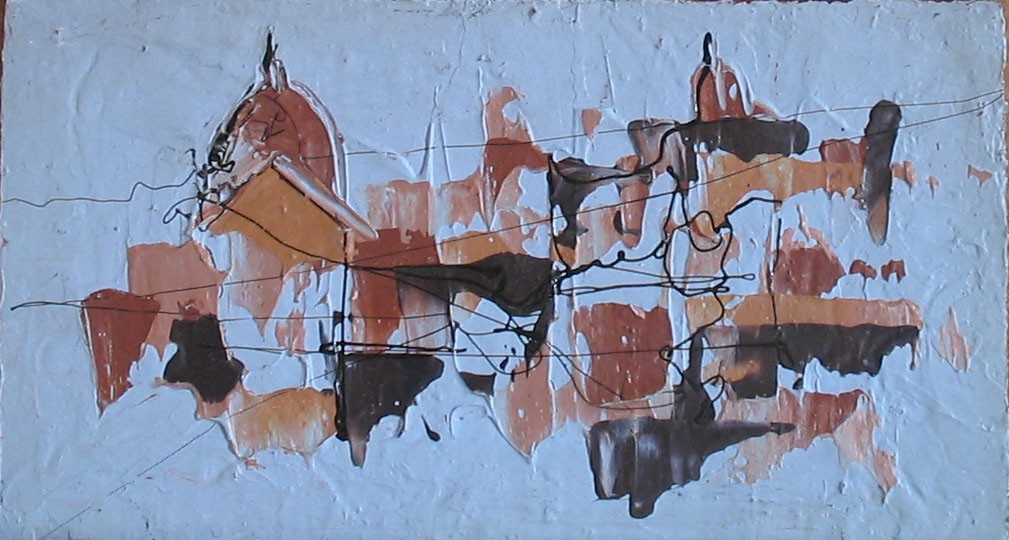 A line of bitumen separated the surfaces. I came to a turning point when I became familiar with the work of William Congdon (a member of the “action painting” group led by Jackson Pollock) and Nicolas De Staël, whom I consider my maestros.
I already mixed the traditional colors of the “Roman School” with the putty knife technique, but the spreading of the “colour paste” became more refined. I abandoned bitumen, and my choice of shades became personal. I started creating my paintings through a superimposition of color layers. Often, one pure, bright color, lights up a whole tonal layout.

For years, landscapes were the only subjects of my inspiration. But I never painted a landscape from life, I never wanted to. It’s always been the concept of a landscape that chose me, fascinating me with its curve lines, with its architecture. I filled my sketchbooks with notes, elaborating these ideas and then transferring their essence on the canvas.
In the last ten years, the human figure, and especially the female one, with the gentleness of its lines and structure, inspired me to create the synthesis I had already achieved with landscapes. The stories of mythology, widely represented in classic art, pushed me towards a new challenge: telling them with my style, using my synthesis of colors and forms.
Those who never messed up with colors can’t understand the feeling, the profound joy that one experiences when your plans and intuitions start appearing on canvas.
In an age where cinema, television and photography give us an exact vision of the world, painting is the only art form which allow to tell through the immaterial substance of color.

To tell – and not to copy – lights, shadows, sensations, poetry, observed, filtered, and by then imaginary things. 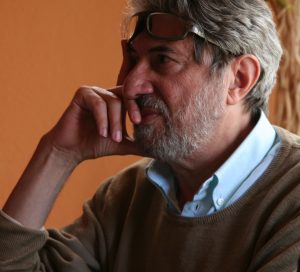 Paolo Petrucci was born in Rome in 1939. After obtaining a Classical High School degree, he also attended an Artistic High School, where he studied painting under Andrea Spadini. At the Art Academy, he was a pupil of Mario Mafai.

He entered the film industry as assistant director. He often worked in the films directed by his father (Antonio Petrucci, journalist, director, teacher at the Centro Sperimentale Film School in Rome), and especially in the ones shot in color.
Even though he kept painting, from 1968 to 2004 he collaborated with RAI as a director and author of cultural programs, among them many about art and painting techniques.

For his art documentaries he received several prizes – among them the Gran Prix de la Qualité de l’Image at the XVIII Festival International du film d’Art et Pédagogique, for the documentary Lorenzo il Magnifico, a biography of the Florentine patron and politician told with the aid of works of art and historical places.

In the meantime, he assiduously kept painting, exhibiting his works in Italy and the USA.
His painting The Three Bishops (1963) is on display at the Vatican, and another has been bought by the Modern Art Gallery in Rome. Several of his works are part of private collections in Italy and abroad.